Purchase an autographed hardback copy of Ed Chaffin’s bestselling book and support a nonprofit in the process.

We Are In A Shared Struggle!

By now I am sure that you’ve seen innumerable articles from people about how we should be or could be responding to the current coronavirus pandemic. Honestly, I’ve resisted writing about it because it seems EVERYONE is writing about this issue, and I wasn’t sure one more voice was needed. There have been some very good articles and one of the best that I’ve read is from the CEO of Korn Ferry Gary Burnison, which I’ll reference later.

What prompted me to finally put down some thoughts on the topic was a webinar that I did for a non-profit organization that I’ve been working with for the past year. This non-profit is located in Marion, IN, about an hour north of Indianapolis, and is run by my great friend Lisa Dominisse. They provide services in the local community that span the spectrum from assisting families and children suffering from child neglect and abuse to providing support for drug addictions, just to name a few of the valuable services they provide. Lisa has a dynamic team that is making a difference in the lives of the people they serve.

When we started our webinar, I did a check-in with the team to see how they were doing and asked the question, “Other than the obvious things such as not many people going to the office, what’s changed for you?” One of the team members immediately said that the situation had created a “shared struggle.” When I asked him what exactly he meant by that, he went on to explain that being in the business of helping and serving other people usually meant that the interactions were one-sided – meaning he was there to support the person, and they were the ones telling him how they were doing and what they needed to bring about a better life for themselves. What he had noticed though was that the exchanges were now mutual – both of them were talking about how they were dealing with the coronavirus pandemic; he found that their mutual concerns enabled him to actually create a quicker bond with the person. It seemed that, even though he was working with people who had incredibly significant issues in their life, they were interested in his issues and challenges as well and that the dynamic between him and his clients had shifted to this “shared struggle.”

I referenced an article by Gary Burnison, the CEO of Korn Ferry, earlier (https://bit.ly/2VHMmpz ). One of the items on his list of things we should focus on was the idea that listening has never been more important right now. I’ve often said that God gave us 2 ears and 1 mouth for a very good reason! But how many of us really take that to heart and have a deep desire to listen when someone else is talking? Most of us, if we’re willing, to be honest, listen to respond versus listening to understand. St. Francis of Assissi said, “Seek first to understand before trying to be understood.”

We should all take his advice and apply this right now because each of us is being affected by the pandemic in very different ways. There is no way that you can fully understand what someone is actually going through because you don’t know everything they are dealing with or the order of magnitude of the issues either. I am working with a CEO and his leadership team, and their head of HR had to resign this month because of having to deal with 3 kids under the age of 5 and her husband’s being part of an executive team of a large firm.

But, if that is all that you know, you might think that you understand her reasons, but here’s the rest of the story – both of them are dealing with health issues with their elderly parents, including one with cancer. Without a deep interest in her life, you might not ever find out the rest of the story for her and understand that her issues were a 10 on a 10-point scale and that she had no alternative but to do what she did! We are connected people who want to belong and feel valued. Howard Ross wrote a book called Our Search for Belonging and posits the theory that maybe Maslow had it wrong–that our baseline needs are actually those needs mentioned above – to belong and especially to feel valued and understood by people that are important to you. When I read his book last year, I immediately agreed with him based on the leadership work that I’ve been doing these past 11 years and throughout my executive career.

I remember vividly a workshop that I was leading. At one point, one of the male participants started crying. We stopped the workshop to take a deeper dive to uncover what was going on. In all of the exercises that we were doing, he was always the “outlier.” He saw the world very differently from everyone else, and his core intrinsic needs were vastly different. His crying was actually the result of finally being understood in a way that he had never felt or experienced before. Even though he was different, we had created a safe environment for him, and the team was accepting and understanding him at a very different level for the first time. One of the executives on the team commented at the end of the day that after almost 40 years of being a leader and going through many leadership development programs, that day had been the most powerful and informative of his entire career because he gained a new lens of how to perceive and understand other people. His final comment was – “I’ve more often than not viewed people that were really different from me as broken, or just plain wrong or even messed up. I get it now. They aren’t messed up or wrong – they are just different, and I understand diversity in a new way.”

My encouragement for all of us that are in the business of serving and leading others is two-fold. One, become the most curious version of yourself that you can be right now. Ask really good questions and don’t assume that you understand what is being said until you’ve probed deeper. Show that you care in a genuine way. Secondly, make sure you are willing to share your struggles with that person as well, but only after you’ve heard their voice. Join together with people and be your true authentic self right now. Seek first to understand but also be willing to show your vulnerability and struggles too. We are in this together – and we will get through this together! 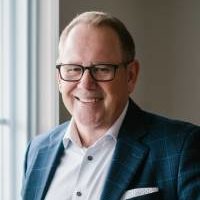